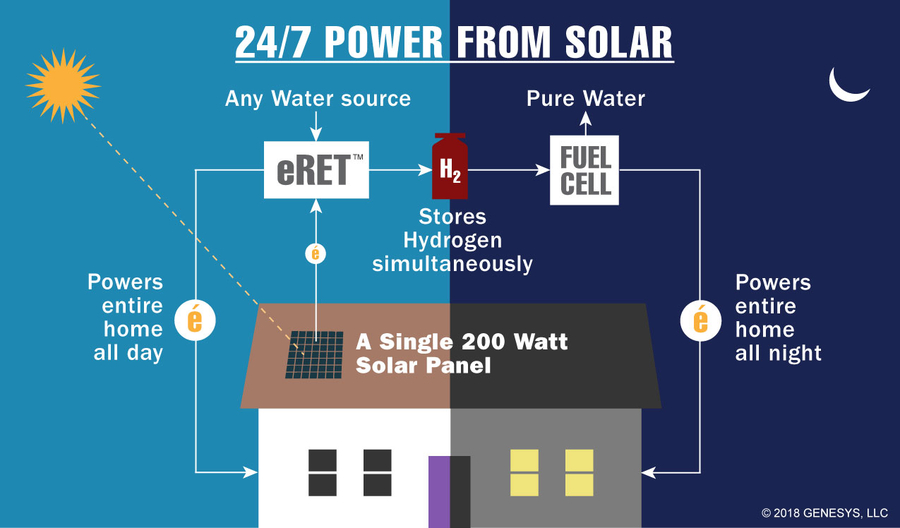 Genesys, LLC has demonstrated a working prototype generating up to 40 Kilowatts from one standard solar panel (200 watts) with certified third-party validation along with being granted a US Patent

PALO ALTO, CA, June 05, 2018 /24-7PressRelease/ — Genesys, LLC announces today that they received a US Patent for its solar amplifier that can generate very high electrical power in the multiple kilowatt range and run for 24/7 service using only one standard solar panel (200W).

The Sun provides a thousand, billion, billion photons every second for every square meter at the Earth’s surface. Even on rainy days, the photon count is astronomical. A typical solar photon possesses a little more than one electron-volt of potential energy (one electron-volt = one volt on one electron). The eRET(TM) (electrical Radiant Energy Transfer) captures these photons and stores them as potential energy (voltage). Accumulated together, very high potential energy (high voltage) can be stored. Conventional batteries store electrical energy in the form of chemical bonds. Batteries possess many disadvantages. Their low energy density coupled with their limited reusability cannot economically supply the high-power needs of the market. Genesys’ eRET technology provides high power on demand with its potential energy storage device. High electrical powers are generated using the eRET’s super convective current generator that relies on a reservoir of high energy charges generated from the conversion of solar photons to electrons. The generated electrons form a high-speed current whose energy carrying capability far exceeds anything an equivalent copper wire can achieve. As a by-product of the accelerating electrons, electromagnetic radiation in the form of waves are created which can be tailored to selective frequencies in order to perform different functions such as telecommunications or chemistry. The electromagnetic wave that is produced can be manipulated to crack water vapor because water vapor possesses certain frequencies that absorb energy to a high degree, leading to the breakdown to hydrogen and oxygen. Using the eRET, nearly all commercial chemicals from petroleum or other fossil sources can be produced using hydrogen, which is a product of the eRET, and carbon dioxide.

The eRET has routinely and reproducibly generated multiple kilowatts of power over a multi-year development and testing program and verified by certified third-party validation. The technology is capable of scaling and can be applied to multiple applications whenever economic 24/7 reliable remote power is needed. Since the energy is stored in the form of high voltage electrons, large quantities of electrical power can be generated on demand.

First Commercial Product
The first commercial product will be able to produce 20KW of power, 24 hours a day, using only one standard 200-watt solar panel. At night, a small hydrogen fuel cell is employed to power the eRET’s power supply which delivers the high potential energy to the eRET’s super convective current generator. The eRET power supply needs less than 100 watts to operate, alleviating the need for using and storing large volumes of hydrogen. A typical home will require less than 50 grams of hydrogen to run at night. A metal hydride storage system is part of the eRET to store the hydrogen for night time use. The volume of the metal hydride container system is approximately the size of three one-liter sized soda bottles which can be conveniently stored in a very small space. The metal hydride storage system is a proven technology that is commercially available. The system will be able to generate direct current (DC) or alternating current (AC) without the need for an inverter. The entire system is about the size of a large microwave oven. The price of a 24/7 eRET single power system in large scale production is forecasted to be in the range of a standard house furnace system. Cost-wise, the eRET system promises to be a much cheaper, ecofriendly, long-term alternative to grid based technologies for the average consumer.

The eRET has Multiple Applications
Other applications include self-charging cars without the need for lithium-ion batteries, drones that never need refueling and the enabling of off-grid electrical power technology. Installing an eRET system in an automobile will eliminate the need for lithium ion batteries altogether at a fraction of the space, weight and cost. In addition, because the water needed to produce the hydrogen is recycled through the system, the car would have an infinite driving range without the need for any refueling. The infrastructure for charging or filling your car is eliminated. The initial commercial product could be implemented as the power plant for a drone. It can create enough lift to carry a payload of 100 kilograms (220 pounds) with an infinite range. Applications include drone delivery for most consumer products, delivery of medicines to remote regions, rescue, as well as surveillance.

Future applications include waste treatment using oxygen (a by-product of the eRET technology) as a source to produce ozone. Other chemicals used in waste treatment such as hydrogen peroxide can be produced on site.

Patent Awarded
In an extensive patent and scientific literature search, the US patent office and the international examiner could not find any similarities to this invention resulting in an allowance of the patent with very strong claims. Michael North, a senior partner of North, Weber & Baugh, LLP, a patent law firm in the heart of Silicon Valley located in Palo Alto, that successfully prosecuted the patent to allowance has said, “It is always reassuring when an Examiner is unable to identify strong prior art that can significantly limit the scope of a patent, which speaks to the underlying innovation behind the invention described in the application.” With respect to the uniqueness of the invention, Mr. North further stated, “[It]… will likely make it difficult for third-parties to design around the claims in any attempt to develop directly competing products.” The company has also filed patent applications globally.

Commercialization
The company is open to multiple types of business arrangements and welcomes additional, certified, qualified, third-party validation of its technology as part of any business agreement. Please contact [email protected].

Biography
Ronny Bar-Gadda, CEO: Mr. Bar-Gadda is an experienced inventor and developer of energy conversion and in-situ chemical generation technology, having completed 12 patents and 5 commercial product launches during his career. As Exxon’s first Biomass Energy Program Manager (Thermal Gasification and Pyrolysis), he developed and commercialized biomass and coal to gasoline technologies as well as co-developed a widely used catalyst for gasoline reforming. He also held key management and technical positions at Applied Materials, Mattson Technology, and Philips Research Laboratories. Most recently, as CEO of Ronal Systems, Mr. Bar-Gadda raised $12 Million and led the development of innovative semiconductor process tools sold to various semiconductor companies. Major investors in Ronal Systems included Intel and Cypress Semiconductor. Mr. Bar-Gadda earned a Bachelor’s of Engineering from Cooper Union and an M.S.E. from the University of Pennsylvania in Chemical Engineering and Chemistry.

Genesys, LLC, a leading-edge technology development company since 2005, is dedicated to the introduction of innovative concepts and inventions that enable 24/7 independent electrical power generation without the need for an electrical transmission grid or batteries using only solar energy and waste water. Solutions to climate change by converting carbon dioxide into economic commercial chemicals, water purification, waste treatment operated and managed by the consumer are among the many areas of interest the company has successfully developed.